Skip to content
“I’ve been everywhere- still I’m standing tall.
I’ve seen a million faces, and I rock them all.”

Immortal lines from an immortal song. ‘Wanted:Dead Or Alive’ is one of the most iconic songs of the iconic rock band that is Bon Jovi. I absolutely love it- the mood of the song, while being so sombre, does not at any point overshadow the main theme of the song- a glorious, assertive celebration of life, of its twists and turns and pitfalls and dilemmas. The video is equally abstract and a constructive whole all at the same time- shots of the band at its peak, performing in front of “a million faces”, and of its members, backstage, tired and drawn, haggard and anxious. 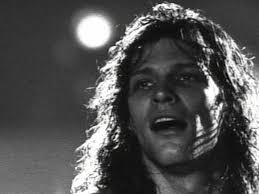 This song is a song of men- of those who have seen life in both in its sunshine and its ugly shadows, and has emerged triumphant, defying all odds, defying those who said they would not make it. I truly believe that this is a ‘coming-of-age’ song- one that can  truly be appreciated when the angst of a teenager and the emotional turmoil of a child has abated, and you can really see life from a grey perspective.

The theme of the song is one common to a lot of songs by this band- of rebelling against norms and boundaries set by the society, of taking it one step further. But unlike most other songs, this one tells us that whether we actually succeed in this different path chosen by us, whether society, grudgingly or willingly, allows recognition and praise to be showered upon us for following this path– does not matter. it doesn’t matter if we do not become an icon. It doesn’t matter if this choice backfires upon us and we are defeated by the hurdles placed in our way. What really matters is the courage to follow the path- the courage to take the decision to stand out– thus, “Wanted: Dead or Alive.” Once we show this courage, we will always be looked upon by those who dare to follow us as a pioneer- the one who started it all. It is, in fact, extremely similar to Robert Frost’s ‘The Road Not Taken’– only different in  the fact that it is expressed through rock music.

My parents often ask me what do I find in common with rock. The genre, after all, is very different from the usual sublime tunes of Blues, Indian classical or teen pop that I used to listen to. The lyrics are jarring, the tune is loud, the instruments are clamorous. Well, I say that each and every song has its own soul, and that each appeals to me in a different way. The tunes of Old Rock, to which I’m only just being introduced, strike me as very honest. No wonder that the rock stars were the rebels and the leaders of the sixties and the seventies- in a world inhabited by suspicion and dominated by fear, these artists paved the way for peace through their revolutionary music. I love it!

And the same is to be said for this song. True, I may not easily relate to the metaphors used in the song, but I do relate to the feelings behind them! When the lyrics say, ‘Sometimes you tell the day by the bottle that you drink’, it is not the metaphor that is important- what is expressed through it, is. It expresses the fact that he is having a bad day– and I very much relate to that!

This post, I think, was mainly inspired by the fact that my mother often complains about my choice in music. Now, i usually try to tune her out, and to justify to myself why, exactly, have my music choices evolved. Through this soul searching, I have discovered two reasons. One is explained in the rant in this post- the other is the simple fact that pop music has gone to the dogs these days and songs are meaningless, commercial, to be watched rather than sung, and just plain stupid. Adele, Bruno Mars and Lady Gaga are the only ones who come even remotely close to being alright and tolerable, for the most part.And I absolutely DETEST R&B, the end.

I love you for having the patience to reach the end! Now off to enjoy some good wine.