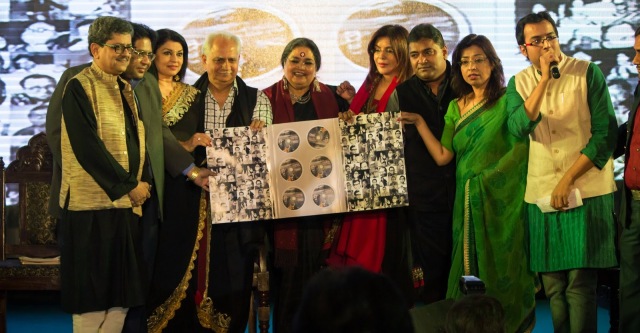 My fangirling feelings have reached an extreme and I am freaking out as Usha Uthup, Zeenat Aman and Ramesh Sippy, among others, take the stage to discuss an album called Memories, created in tribute to the legendary composer R D Burman. The stars sparkle even brighter than the big Bangla “Ka” inscribed on Didi’s bindi, and the discussion begins.

“Films without music is without a soul,” says Mr Sippy, and the reminiscences about the genius of Mr Burman start to flood in. His energy and enthusiasm, his distinctive use of percussion in his songs, all made Mr Sippy sure that here was “the man of tomorrow”. And thus the magical collaboration began, “Seeta and Geeta” was only one of the films that came out of this pairing- “Sholay”, of course, is perhaps the best known, as well as “Sagar”, with the famous song “Sagar Kinarey”. As Mr Sippy says, the soundtrack of Sholay was probably as popular as the songs. “Mehbooba, mehbooba” too dances its turn into the discussions of the panel: Mr Sippy recalled the moment that song was born. The enchanting Zeenat Aman expresses incredulous delight that Mr Burman had composed for 27 of her films- the most of any leading actress!

Didi takes the stage and shows that she is just as adept at weaving magic with her words, as with her melodies. The “misty watercolour memories of the day we were”, in her own words, come to life as she talks about his music and his personality: how he is relevant to the youth of today,  how he was always vibrantly, beautifully, dynamically enjoying life, even how his colours were red, black and white, and most of the panelists had ended up wearing, in a completely unplanned manner, that exact combination in his memory!

And then the long-awaited moment arrives: all the stalwarts take centrestage to release the album to the familiar tune of R D Burman’s melodies in the background. Did’s strong, beautiful voice resounds through the auditorium, to surround and immerse us in music: his sharp wit, his “terrible sadness”, and finally jis joyful memories.

The performance wove warmth, emotional; turmoil and love into the chilly air of the auditorium, the speakers were truly wonderful orators; somehow they managed to make an interaction in a tent packed with people, personal and infused with companionable warmth, and it was a fitting ending to a lovely, busy, busy day.

You have kept your promise of great memories and greater interactions, Kolkata Literature Festival. Thank you.

PS- what is the dEAL WITH THE PRESS PHOTOGRAPHERS OF KOLKATA?! The mob in the French Revolution was better behaved!