I remember the first time my father sat me down to teach me how to sing.

It was in our apartment at Selimpur, almost fifteen years ago. On the first page of a long crimson notebook, I pencilled, as my father dictated: “Alo amar alo ogo, Aloye bhuban bhora/ Alo Noyon dhoa amar hridoy hora”(O Light, my Light/ Light purifies my vision, and it steals my heart). I could sense that the song had something to do with light- lots and lots of light.

Now that I reflect on this, light is one of the first things I feel when I think about Rabindranath.

This man has been such an integral part of my life that the connection seems almost familial. I confess that most of my association with his works has been through music. Brought up in a musical family, I was used to listening to my parents sing his songs frequently.

At ten years old, I joined a school that cemented my bond with Rabindranath (I used to hate saying “Tagore” as a child. I still do, kind of).

Everyday would begin with a half-an-hour long assembly. At the assembly all two hundred and fifty of us secondary students would sing songs in a variety of languages. I remember our spirited versions of Spanish, Chinese, Punjabi, Russian, Nepali and French songs, accompanied by a piano. But it was Rabindranath’s songs we sang the most. It’s been four years since I left the school, but I still crave that deep happiness of singing those songs in unison with everyone else.

In class 8, our whole class was scolded because one of my closest friends and I had scribbled song lyrics, mostly Rabindranath’s, on the newly painted yellow benches.

I was fourteen, and experiencing a new kind of love. “Ketechhe ekela, biroher bela, akash kushum choyone/ Shob poth eshe, mile gyalo sheshe, tomar dukhani noyone” ( We spent the hours of separation alone, traversing on the path of imagination/Now all paths meet in your eyes)– no other line could so aptly describe how I felt when he and I exchanged shy glances in the rear view mirror of a jam packed pool car.When I broke away from that relationship and came back to school after New Years’, I sang with gusto at the assembly: “Hey chiro nutoon, aaji e diner prothom gaane/Jibon amar uthuk bikashi tomar pane”(To that which is Forever New, in the first song of the day/ Let my life rise towards you).

Rabindranath was always there for me to turn to, no matter what.

Petty sorrows like poor academic performances, or tiffs with parents would be dealt with “Andhokare mohe laaje, chokhe tomay dekhi na je/Bojre tolo agun kore amar joto kaalo”(The anger shames me, I cannot see you/ With thunder, light up all that is dark in me).

As the years passed, I grew more and more intrigued by Rabindranath’s tumi.

His intricate inter-weaving of the Lover and The God into a bottomless embodiment of the Self continues to fascinate me to this day.

This was a man who endured the passing of several family members, including his own children. And yet he was capable of generating within himself a profound sense of oneness with the Universe.

When I listen to his songs, I often find explanations for my own thoughts and behaviours.

When I heard the line “Ontoro momo bikoshito koro, ontoro toro hey”( Let my inner core blossom, O innermost being) , I was struck by the simplicity of it. All the solutions to my self esteem issues lay within my own mind, I realised.

Sometimes, I would interpret a complex song in my own ordinary terms– when my class 10 board exams got over, I wanted to sing: “Mone holo, jeno periye elem ontobiheen poth, ashite tomar dare/ Moruteer hote shudhashyamolimo pare” (It feels as if I crossed an endless path to reach your door/ From the desert to the greenest of shores).

Contemplating a new friendship, I thought “Poth amare shei dyakhabe, je amare chaay/ Ami obhoy mone chharbo tori ei shudhu more day” (The one who wants me will show me my path/ I can only set sail, that is my only duty).

When I walked down the city streets with thousands of people during Hok Kolorob, I couldn’t help but think “Elo mohajonmer logno/Aji omaratrir durgo toron joto dhuli pore hoye gyalo bhogno” (The hour of the great Birth is upon us/ The castle doors of the dark night come crashing down into the dust).

As I write this piece, with each line I ask myself “Is that all?”- and a rush of memories come hurrying back to me.

This man is not “Kobiguru”. He is not the bearded saint who Bengalis must worship because if they don’t, they are not Bengalis. This man is my friend. He holds up a mirror when I need it most.

Rabindranath held up a mirror not only for the individual but for society as well.

As my country grapples with communal forces spewing sexist, bigoted rhetoric, flexing their muscles in their quest to establish flawed ideas about nationhood, we need him even more. His poetry, novels, essays, plays and letters are a tremendously rich reserve. It saddens me when I see these forces use him a symbol of the supposed greatness of the country, when few have been as vocal as him on the dangers of prioritising nationalism over the ideals of humanity.

Vishwabharati University, the institution he founded in the hope of creating a space for people of all cultures from all over the world to exchange ideas and knowledge, has failed miserably to live up to his expansive vision. We are forced to listen to his music without context and meaning at traffic signals; we remix his songs to suit ‘westernised’ musical tastes; we dissect his relationships with women to create cheap entertainment- but we fail to learn from him.

As I turn twenty, two days after his 155th birth anniversary, I am determined to imbibe what I can.

(All my innermost sadness and the trivialities of daily life-

Vanish in the blink of an eye-

If I perceive you within my life,

I travel with my heart and mind,

And I find no Sorrow, no Death, and no Separation)

It is the 155th birth anniversary of one of Bengal’s most loved poets, Rabindranath Tagore.

Most Bengali children enter the world of literature through his poems and stories. I remember reading “Shishu Bholanath” at six years of age. I can still recite those poems from memory.

This incredible article was written by Proiti Seal Acharya, my talented friend. Thanks for writing this, Proiti. I found myself in it. 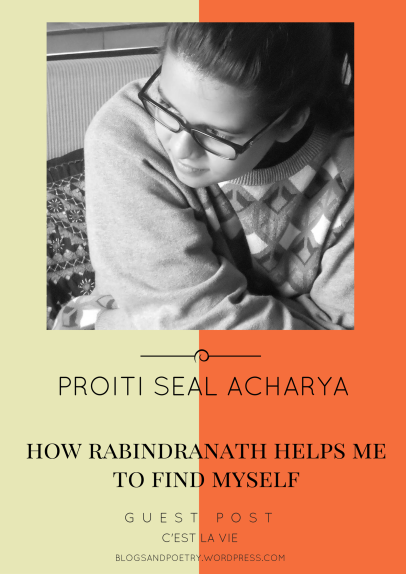