Papercup’s spoken word events are legendary in Kolkata. In a very short period of time, the happiest start-up you’ve ever known has created a dedicated follower base, including yours truly. So when Poetry Slam 0.6 came along, Spiktinot was right on board. Here are the highlights of one of the best poetry slams the city has experienced.

22 slammers took part in this event, 22 slammers who turned their sweat and blood into ink to perform here.

First-timer Shataparni Bhattacharya was nervous before the Slam. “I’d never even witnessed a poetry slam in real life before, let alone perform,” she said. Given the crowd that awaited her, the nerves were understandable. But once shewas under the spotlight, everything changed. “Turns out that a lot of people were there for the first time,” she exclaimed. “And that sort of made it better. Like, here I was with a bunch of people who seemed to be a socially challenged as I was, partaking in something that involve going up in front of everyone and being in the spotlight and performing. It was scary, but it was liberating and also far more comfortable than I expected.”

Her performance brought down the house at the slam. You can watch it here:

Veteran slammer Arpita Roy, meanwhile, was awed by the newcoming tide. “That was the best part,” she said, “Getting to hear new poets and new voices and the fact that they were brave enough to speak about the things that matter to them and that Papercup provided that space for them.”
Arpita was one of Shataparni’s favourite performers. Come to the next slam and  you’ll see why!

The performances were blistering, hard-hitting and intense. Audience and performers alike were stunned by the breathtaking display.

“That was my 5th or 6th time performing,” said Ananyaa Bhowmik. “I hadn’t been to Papercup’s slams before but had heard that they are kinda the best in the city. I had heard right.”

She was floored by the participants’ performance. “(They) were extraordinary in all their naked blunt glory,” she said. “It always hits me, how honest and real people are at slams. Maybe it’s because all of us are there at that time because of the same of love of words, same admiration for the magic it can create. That’s our comfort zone. It is the island for us misfits.” 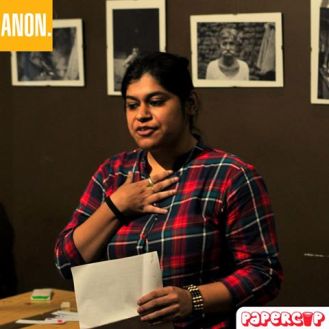 And then, of course, there’s Papercup’s bubbly happy vibe. When your blogger managed to struggle through the door (one hour late, true to form), the cafe was packed to the rafters. Yet, amazingly, there was no sense of suffocation, only closeness.

First-time performer Avhinandan Chakraborty agreed. “The crowd was supportive and the place, though small, was very cosy,” he said. “The food was good too! I had a memorable time.”

“We have been hosting these slams for a year now,” said Sukrit Poddar, owner of The Chaiwala. “As a cafe, we wanted people to use the space for interactive performances and similar things. I remember the first time we had around 10 or 12 performers. The event has become way more popular since then!”

It goes without saying that all the performes, new and old, were extraordinary. But one stood out particularly in my mind.

You know that feeling you get sometimes when you’re asleep, and you suddenly wake up gasping for breath, struggling against invisible bonds you had been unaware of? That’s what Sohini Mukherjee’s ‘Dimensions’ felt like.

The work of art was a poem through which the word “Zero” thudded like a drum-beat, signifying not just bodies and sizes but the sum total of what every woman is supposed to be under patriarchy.

I caught up with her afterwards to ask what inspired her to write the poem.

“I wouldn’t really call it being inspired,” she replied. “It was more like being enraged. It was less of a poem and more of a rant, although there could be poetry in ranting too. It took me eighteen years to realize that there was nothing wrong with my body.”

Somrwita Guha, founder of Papercup and slammer extraordinaire, considers performance poetry to be a great way to explore conflict.

“It is the impetus to give artistic expressions to the battles we live every day,” she says. Having been the one to almost single-handedly introduce Kolkata to the art, she points out how rapidly the art has caught on in the city.

“The Slamming culture in Kolkata was non-existent when we first started,” says Somrwita di. “Now, it has grown so much. There are many others holding slam events in the city. It’s astonishing to see the enthusiasm of the participants.”

She says unhesitatingly that the works performed at o.6 were undoubtedly the best ever. “In each slam, we’ve seen the quality get better and better. 0.6 was no exception.”

Papercup 0.6 was the start of great things to come. The event, held in the cozy environs of Kolkata’s favourite cafe, introduced new faces to the poetry circuit and saw the triumphant return of old ones. It was crazy, it was fun, it was controversial and it pushed both performers and the audience far out of their comfort zones.

What more could a poetry lover ask for?

Spiktinot is the blogging partner for Poetry Slam 0.6.

If you liked this post, don’t forget to share it with friends and spread the happiness  ❤️

Credit for ALL graphics go to The Anon. Productions!

Thanks, Somrwita di, for being so patient with me even though I was like 23474987 years late in putting this up. Thanks to everyone I spoke to at the last minute. And thanks to ALL the performers for gifting us an incredible event.