The first thing I did on coming back from London, after attending Future News Worldwide 2019, was to nap for about 16 hours.

I had run the length of Abu Dhabi airport within 15 minutes to catch my connecting flight; my luggage hadn’t arrived with me; and the second I landed in Kolkata, the heat and humidity punched me in the face like an angry God. I was exhausted.

The second thing I did was to turn on my laptop and type up my resume for a job in journalism.

You know that feeling when you feel like you had lost your way for a really long time, without even knowing it? Like you had been walking through a dark dense forest and had, at some point, wandered off what you knew in your heart to be the right path, tempted by the will-o’-the-wisps lurking in the swamps nearby?

And worse, when you discover your mistake, you resign yourself to the wrong roads, believing that’s all you’ll attain in life? And then suddenly a beacon of light shines through the confusion and grief to bring hope and light and direction back into your life again?

That’s what Future News Worldwide 2019 felt like, for me. My application for this two-day journalistic conference, held in London at the headquarters of Thomson Reuters, was more or less an accident. I follow the primary organizers, British Council, on Twitter, and I just happened to stumble across a tweet that encouraged people to apply for it.

The second I had read up on the details, I knew I had to try, and although, as a young professional in a highly competitive field, I had become used to rejections, I went ahead and curated my application anyway. I remember being very worried about how the revenue sources in journalism are drying up, thus preventing enthusiastic freshers from entering the field (because, ultimately, most of us don’t want to starve).

So I focused on the need to find out how Google News Initiative and Facebook, both partner organizations for the conference and now major publishers for digital journalism, could help news organizations draw traffic to well-researched, unbiased news reports.

Andrea Willford, from Strategic Partnerships at Instagram, tells us how to best use the platform as a medium to disseminate news. 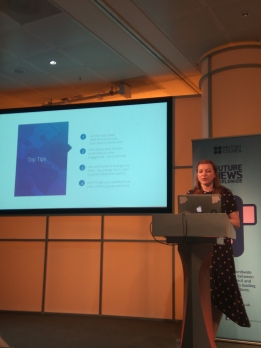 How can Facebook help to shine a spotlight on good journalism? Sarah Brown of Facebook tells us. 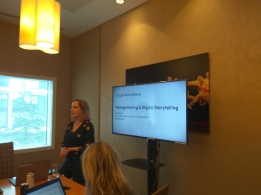 I still remember the exact moment in which I saw the email informing me that I’d been accepted. As Cleo Anderson, an alumnus of the conference, mentioned in her speech on the opening night, imposter syndrome dogs one constantly in a field like this.

I quite literally could not believe that I had a chance to not only attend this conference and meet 99 other young journalists from all over the world, selected from more than 3,000 applicants, but also to be in London, and see all the places I had imagined myself in from a very young age. Frankly speaking, without this conference, I would never have had the chance to do so – at least not for a very, very long time, given the financial and bureaucratic hoops that us Indians have to jump through to be able to get there.

And when the conference finally arrived, it felt both like it lasted a hundred years and like it was over before any of us could blink. Two main emotions dominated. Firstly, there was a general feeling of disbelief at being able to meet the people we had idolized for a very long time. For me, it was Sreenivasan Jain of NDTV, whom I had grown up listening to and wanting to be like. Undercover news reporting is a common tool used in broadcast journalism in India and his presentation proved the dedication of the reporters who take on such assignments.

Another star-struck moment was meeting veteran journalist and news presenter Jon Snow, of Channel 4, who gave the after-dinner speech on the first day. I told him I’ve always been a huge fan, and not just because I watch Game of Thrones. He replied, “Well, I do know nothing, and I am a bit of a bastard!” What an absolute legend that man is. 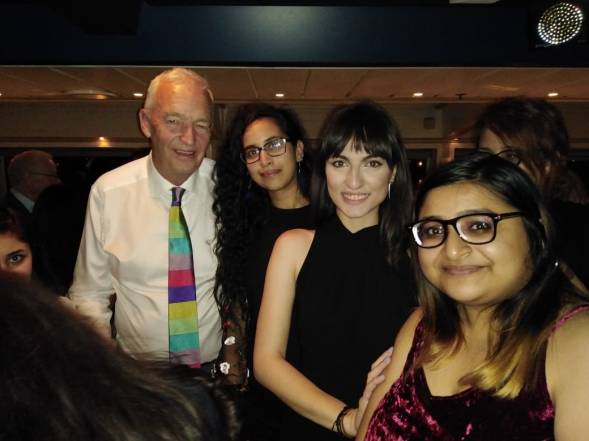 Secondly, there was stunned astonishment at the sheer scale and quality of work that we witnessed. We met people who’ve taken incredible risks while doing their jobs, such as war correspondent Christina Lamb, who made friends with the Mujahedeen in Afghanistan during the Soviet Army’s invasion in the 1980s and who was in the bus with Benazir Bhutto when it was bombed in 2007.

Then there was Sonny Swe, co-founder of the Myanmar Times, who was arrested and sent to prison in Myanmar, where he served for eight years of a 14-year sentence before finally being released in 2013. Swe spoke about the importance of mental strength over physical strength, and how he had resorted to speaking to the insects and the birds outside his prison cells to stay sane. 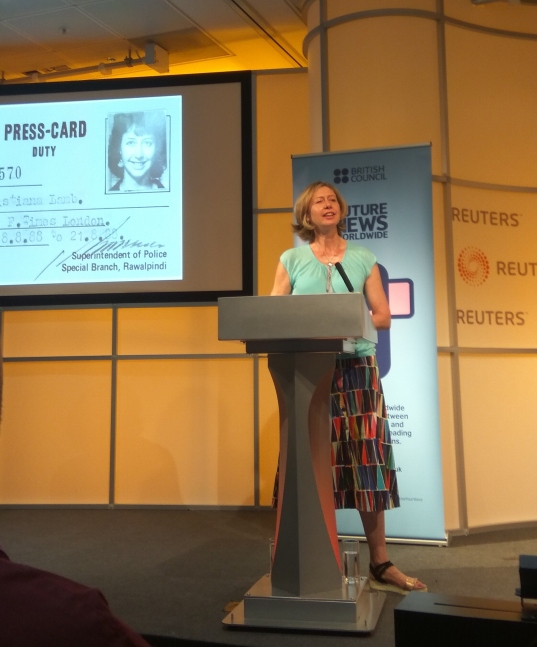 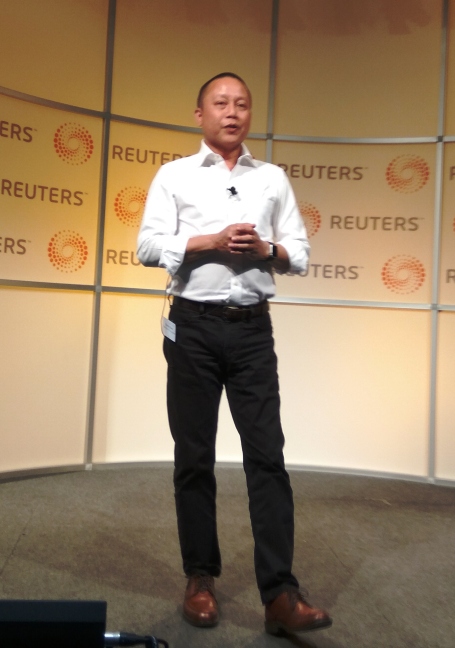 Catherine Gicheru, data journalist, veteran Kenyan editor and ICFJ Fellow was not only one of the kindest people we interacted with, but one of the most inspiring, as was Ritu Kapur, co-founder of The Quint.

I asked Catherine how she found a footing in data journalism when there were not many women in the field and she gently touched my spine, saying, “Because you’ve got one of those!”

Ritu Kapur, co-founder of The Quint

For me, the highlight of the conference was the presentation by Ailaume Leroy and Benjamin Strick of BBC Africa Eye, who talked about their work with open source journalism applied to analyze user-generated news footage emerging from conflict regions in Africa. One of the reports that they prepared, Anatomy of a Killing, is available on Youtube and one has to see it to believe the investigative and technological prowess that went into analyzing the footage. The two of them also, very kindly, took a bunch of us around the BBC newsroom, which felt more like a pilgrimage than a short visit.

Something about Benjamin and Ailaume’s work reignited a dying flame within me. I think I had forgotten, somehow, that journalism mattered.

In today’s 24/7 news cycles, both the sheer volume of news, as well as the immoveable machinery of authority that this news dissects, lend to the act of journalism a feeling of doomed inevitability. One feels as if nothing will happen, nobody will change and within a few hours, that earth-shaking report will be drowned out in the cacophony of a million others.

FNW 2019 reminded me that this was not the case. Conducting good journalism to hold the authority accountable is and always has been and always will be an uphill battle, but there is worth in fighting it. And, more importantly, there are people who are committed to this fight, who will fight alongside one – if one only has the courage to join in.

And although I am not alone in my doubts and frustrations regarding the job either, once I find my place amongst people like me who want to dream and fight, I will not be alone in my battles.

As soon as I landed in Kolkata, within a day, I could feel the old what-ifs creeping back into my heart. Everything seems insurmountable once again. What if I never get to where I want to? What if I’m not good enough?

But now I have the memories of #FNW19 to ward off these thoughts. I have something I can point to and say, “Look. I went there. It wasn’t just a longed-for dream. And if it could happen once, it can happen again.”

And that, I think, is the most precious gift Future News Worldwide has given to me.